Intro to the Duct Tape Messiah

I've been a fan in one way or another of Americana - alt.country - singer/songwriter - 'grunge country' - or whatever you want to call it for over 25 years. About 10 or 15 years ago, I started to notice how one songwriter after another consistently mentioned someone named Townes Van Zandt as an influence. Sometimes the reference was to a Townes song they were about to cover - or simply as an inspiration for a song they wrote. Either way, the name was often spoken almost in reverence with sometimes tear-filled eyes and a catch in their voice.

Yet I didn't get it. I listened to latter day songwriters, and I even enjoyed songwriters of days gone by such as Roger Miller. Yet, somewhere along the way I had missed Townes. About 5 years ago, I finally started listening to him myself and was stunned by what I heard and what I'd been missing.

As I started listening to Townes and learning more about him, the name Blaze Foley popped up often. I still don't know much about Blaze, and I'm not sure many folks do (at least the truth about him). But I do know he was a running partner of Townes and a damn good songwriter in his own right.

Blaze lived a paradoxical life - the simple life of a homeless vagabond yet with as many complicated tangles as a bowl of spaghetti. Songwriter, performer, committed, aloof, here, there, yonder, lover, abandoner, irritant, compassionate.

He was murdered in 1989 by being on the wrong end of a .22 caliber rifle. At the time of his death, he was more than a half-decade younger than I am today.

Lucinda Williams penned her song Drunken Angel for Blaze. Also, a few years after his death, Townes released a song in tribute to his friend titled Blaze's Blue. Sadly, a couple of years after its release, Townes too was dead.


For the better part of the last 10 years or so, an electrical engineer turned filmmaker, Kevin Tripplett, has worked on a documentary about Blaze. The movie is about ready for release and is titled Blaze Foley: Duct Tape Messiah. Saturday night, a condensed version of the movie was screened at Nashville's Douglas Corner Cafe. About 40 to 50 people came out to see it. To the rest of Nashville? Your loss folks.

Following the screening, singer-songwriter-instrumentalist-producer Gurf Morlix played a significant number of tracks from his recent tribute release Blaze Foley's 113th Wet Dream. Morlix is more than just a fan of Foley's. He often accompanied him at his shows by playing guitar. 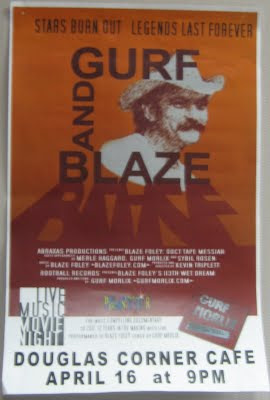 Right before the movie began, Sybil Rosen was introduced and asked to come to the stage. To say she knew Blaze in an understatement. She was Blaze's true love...for a while. Her time with him is documented in her book titled Living in the Woods in a Tree: Remembering Blaze Foley. She read a couple of passages from her book before the movie began.

After Sybil finished and sat, Kevin Tripplett quickly raised a movie screen and turned on a projector. With that, the documentary Blaze Foley: Duct Tape Messiah began.


I'll try not to ruin the enjoyment of others in watching it by giving away a bunch of spoilers here. But I think I can note a few things without ruining the overall movie.

Blaze admired the songwriting of John Prine; however, his running buddy and real songwriting inspiration was Townes. Based on some video footage included in the movie, when Blaze and Townes were together, Blaze's antics could make Townes look like the 'straight guy'. And that had to have been a tall task.

As great as the Austin songwriting and performer scene is now, the early 80s had folks such as Joe Ely, Billy Joe Shaver, Townes and Blaze amongst its songwriting residents. Amazing.

The movie aired for around an hour. Before Gurf Morlix took the stage to sing, Tripplett offered to answer a couple of questions and stayed around the rest of the night to answer additional ones. I approached him after Morlix's performance and commented about the length of the movie. With so many years of preparation and the various interviews and research he did, it seemed the movie would last longer. He told me the 1-hour condensed version was shown to couple with Gurf's set. The idea was to hold the audience's attention with a healthy dose of both. The final cut will likely include another half-hour or so according to Tripplett.

He also told me that while he never met Blaze, he feels like he knows him through stories told to him my relatives who had met Blaze and through the research and interviews done for the documentary.

Gurf arrived on stage with no introduction or fanfare. I was actually in the middle of checking Twitter when suddenly I realized he had just walked on stage, said a couple of introductory comments, and began.

Big Cheeseburgers and Good French Fries
Clay Pigeons (Gurf noted this song has been covered by Willie Nelson, Merle Haggard and Lyle Lovett. He also noted John Prine covered it on his Fair and Square release.)
If I Could Only Fly
Wouldn't That Be Nice?

As the movie continues to be screened around the country, get out to see it if possible. If nothing else, look for its full release in late May according to Tripplett.

Meanwhile, head over to YouTube and get lost in the various Blaze performances and covers uploaded there.

TMC
Blogged by toomuchcountry at 11:57 PM

Join me in supporting RITI